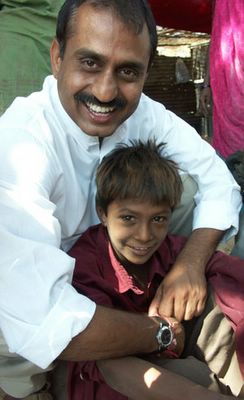 Jayesh-bhai greeted us at the entrance of ManavSadhana with a huge smile along with a hundred kids from the hostel. This man that I’ve heard so much about, the inspiration behind ManavSadhana, who’s met everyone from the Dalai Lama to the President of India, is truly one of the most humblest person I have ever met. Born at the Gandhi Ashram, he’s dedicated his entire life to service.

The next few days he took time out from his busy schedule to show us around and introduce us to various projects that MS is involved with. There are literally hundreds of initiatives serving the poor around Ahmedahbad. One of the most inspiring days for me was a walk through the slums that are a home to about 150,000 people. The major occupation there is rag-picking, which involves sorting through trash to find anything valuable to sell for a few rupees to the recycling hubs.

Jayesh-bhai knew pretty much everyone in town or rather everyone knew him. As we walked through the tiny streets filled with trash, the young and the old alike stopped what they were doing and shouted a hearty Namaste with folded hands. He discussed health with the sick and cleanliness with the children, as he picked each one up and stroked their hair. Most of all, he made them feel loved. Whether it was a baby, an elderly, or teenagers, they all had his undivided attention. He had nothing but concern and compassion for everyone he passed.

As we walked back to the Gandhi Ashram seemingly worlds apart, Jayesh-bhai had more people waiting in the living room for his advice and help. Patiently he sat listening to each person’s problems. No one was ever turned away, which explains the number of programs run by MS, if they don’t have the solutions, they’ll create them.

I pondered over the magnitude of not the number of people Jayesh-bhai has helped throughout his life, but the humility and compassion that he approaches each situation with day after day. I feel both privileged and blessed to be in his company for he represents the light that is in each of us but he's definitely someone that shines that light a little bit brighter.
Posted by guri mehta at 2:37 AM